Born in Cheltenham, where she still lives, PJ studied at Gloucestershire College of Art and Design which was eventually absorbed by the University where she was awarded an honorary Doctorate of Arts in 2010 and in 2011 an MBE for services to art in the Queen's Birthday Honours. She is represented by galleries in London, New York, Paris and Toronto, as well as here in the Cotswolds, and her work is in major public, corporate and private collections in many parts of the world, principally in Japan, France, Saudi Arabia, England and the United States of America. Cheltenham Art Gallery and Museum, Gloucester City Museum and Art Gallery; Imperial War Museum; Morohashi Museum of Modern Art; Standard Chartered Bank; Centrica; Paul Allen; the Marquess of Bath; the late Jackie Collins and Toyah Willcox are among those who have works in their collections.

From a studio opposite her house, she manages compositions on a monumental scale - paintings can measure 2 x 4.5 metres and also paints small pictures, some no larger than 10 cm square. She works in tinted gesso, acrylic and sometimes in oil on canvas, or on a corrugated wood support, which gives a three dimensional effect to her work, as does her practice of incorporating the frame within the composition. A recurring theme within her work is crowd interaction and some of these paintings have been used as covers for King Crimson's recent albums.

PJ is a Patron of the National Star College, Cheltenham; a Trustee and Director of ACS (the Artists Collecting Society); President of the Friends of Cheltenham Art Gallery and Museum; a Gloucestershire Ambassador; Fellow of the Royal Society of Arts; member of the Royal West of England Academy (and sometime member of its Council); Manchester Academy of Fine Art; Chelsea Arts Club and the Honourable Company of Gloucestershire.

We are fortunate enough to have had the pleasure of representing PJ for many years. 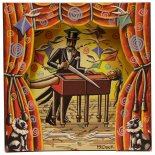