Georges Csato was born in Hungary and studied in Vienna. He was drawn into the vortex of the 1930's and later, in Prague, studied under some of the great names of the period-Archipenko, Hofer, Kokoschka and Thiel who had taken refuge there from Nazi Germany.

He was taken prisoner by the Russians and only survived by painting portraits of his captors. At this time he also painted Stalin. He later became a distinguished portrait painter whose sitters read like a catalogue of the most famous names of the 30s, 40s and 50s from Colette to Einstein, from Rachmaninov to Bertrand Russell. His first exhibition, organized by Jean Cocteau, was held in Paris in 1948. Throughout the post-war years he produced abstracts of great purity and harmony, a salve to the horrors he had experienced during the war.

He taught for some time in Canada, and his work resides in major collections in many parts of the world. Upon his death in 1983 the contents of his studio was passed to his family. All of the paintings in this collection come from this one source. 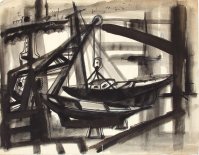