The original idea for Karen's paintings came after time spent working in London, visiting New York and simply being enveloped in city life.  She became fascinated with people watching, particularly crowds and the patterns they produce.  She is influenced by scenes from the past and everyday life - crowds waiting for a train, queues at the cinema, footage from old films, the often frantic city streets bustling with shoppers - they capture a feeling of the city as it is now.  A place where time, and people, rarely stop.  Her favoured medium is oil and mixed media, she will often applying the paint with rags, working it across the canvas, scratching and rubbing into it, leaving surface traces of physical movement and energy. 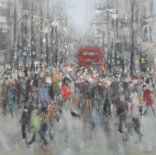