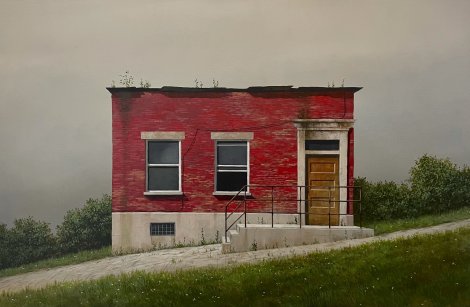 "Lee Madgwick’s paintings have the unearthly power of a disturbing dream in which familiar places are cut adrift from everything reassuring and become outposts in a desolate spinal landscape. But a dream is indistinct, and fades; here they with the unfading, scrupulous, fascinating detail of a Dutch Master. Silence hangs over every canvas and poetry is found in meticulous renderings of every form of decay. Not death, though – his scenes are alive. The natural world thrives and reclaims, people have been here recently (thought they might not have meant well), and the weather is about to change."  Will Wiles

The artist explains: “I hope to achieve a sense of drama in my work. Presenting a familiar image yet placing it in an intimate and moody setting. A narrative is very important – but intentionally never fully explained. I like to leave it for the viewer to come up with their own interpretation.”

Lee paints on canvas in oils and acrylics. A play of light is used to generate an abundance of seemingly inexplicable moods to contrast with a brooding sky. Lee has exhibited in Norfolk, Cambridge, London, Edinburgh, Dublin, Amsterdam, Milan, Stockholm, Singapore and New York.  He is a member of the Royal Society of British Artists (RBA), and in 2015 was asked by Banksy to showcase his work alongside internationally acclaimed artists at a large temporary art project called 'Dismaland'.  In  2018 his drawing ‘Shroud’ was selected for the Derwent Art Prize and in 2019 he was commissioned to paint a piece to feature as the cover art on the Kaiser Chiefs album ‘Duck’.

Lee was born in King's Lynn, Norfolk in 1980 and later graduated in Graphic Design from Norwich University College of the Arts, 2003.