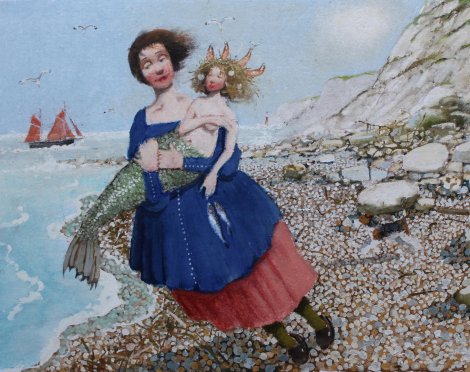 This exhibition 'A Corner of the World' consists of apprioximately 30 new paintings and we know you'll find them hard to resist!

How does one describe Richard Adam's paintings?  Visionary, idiosyncratic, surreal or just plain hilarious?  The answer is probably all of these.  His humour and fertile imagination seem to know no bounds.  Adams creates idylls and then adds quirky people that often float above the ground and seldom stand upright.  His is a whimsical world of earthenware jugs full of cider, tractor rides, wild unabandoned partying and handstand competitions.  He is a master of imagination, a champion of originality and a pastel artist of the highest calibre.  He has an extraordinary ability to connect with the viewer and his saucy sense of humour never fails to provoke a broad smile.

Richard Adams studied illustration at Leicester Polytechnic where he received a BA Hon degree. Having been born in Hampshire his family later moved to the stunning South Cotswold countryside of Wiltshire, a landscape that has had a strong and lasting influence on his work. Following his graduation Adams first moved to London where for many years he produced images for clients such as BP and the Radio Times and since then settled in East Sussex.

All paintings are avaliable to view at the Gallery by appointment by contacting the gallery on 07582 602943 or by emailing gallery@briansinfield.com.

To view all available paintings by Richard please click here